EUROCAM is the European foundation uniting European umbrella organisations of patients, physicians, veterinarians and practitioners in the sector of Traditional, Complementary and Integrative Medicine.
EUROCAM represents 60,000 organised patients/citizens, 250 national CAM associations and a substantial part of the 400,000 doctors, and practitioners in this sector across Europe.
EUROCAM covers a broad spectrum of CAM modalities, including acupuncture, Ayurveda, anthroposophic medicine, herbal medicine, homeopathic medicine, naturopathic or traditional European medicine, osteopathy, reiki therapy, and traditional Chinese medicine.
The practice of Traditional, Complementary and Integrative Medicine modalities affiliated to EUROCAM is based on clinical expertise, which has been collected in the course of their existence, and the best available clinical evidence from scientific research built over the last few decades.

EUROCAM is registered in the EU Transparency Register under Identification number 659086014916-83.

EUROCAM aims to promote the contribution of CAM to better health in Europe.

One in two EU citizens uses complementary medicine either alongside or as an alternative to conventional biomedical care. They would like to see increased integration of complementary medicine into healthcare systems. This in line with the European Parliament resolution on EU options for improving access to medicines (2016/2057(INI) saying that “patients should have access to the healthcare and treatment options of their choice and preference, including to complementary and alternative therapies and medicines” (Recital text, section D).

There is a growing movement toward “integrative” or collaborative practice models, attempting to bring CAM and conventional medicine together in a cooperative fashion.

Traditional, Complementary and Integrative Medicine – this is the term WHO uses in this context – focuses on the whole person and considers the individual in its physical, psychological, spiritual, social and environmental context. It is inclusive of all professions and practices that use this approach and meets the demand of EU citizens for a more holistic, patient-centred approach in medicine.

EUROCAM runs the secretariat of the MEP Interest Group on Integrative Medicine & Health in the European Parliament.

The aims and objective of this MEP Interest Group are:

International and European umbrella organisations that are affiliated with EUROCAM constitute the General Board. 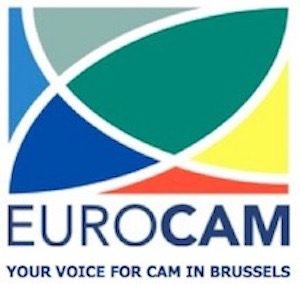