Some European countries have government-administered regulations or laws about the practice of CAM in general, some have sections on CAM included in their health laws, some regulate specific CAM therapies, while many national health systems do not recognise or regulate CAM at all.

The CAMbrella report describes the situation as follows:

Of the 15 original EU member countries (joined the EU before 1996), 3 (Belgium, Germany and Portugal) have a general CAM law. Denmark has a “law on a self-regulatory registration system for alternative practitioners”. These 4 countries have additional regulations on specific CAM treatments.

The 2 new Member States that joined the EU in 2007, Bulgaria and Romania, have a general CAM legislation as well as specific CAM treatment regulations.

The CAMbrella report “Legal status and regulation of CAM in Europe. Part I - CAM regulations in the European countries” provides more detailed information. It is available here. 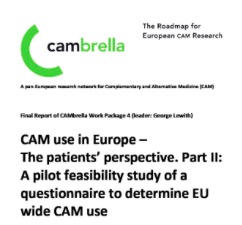